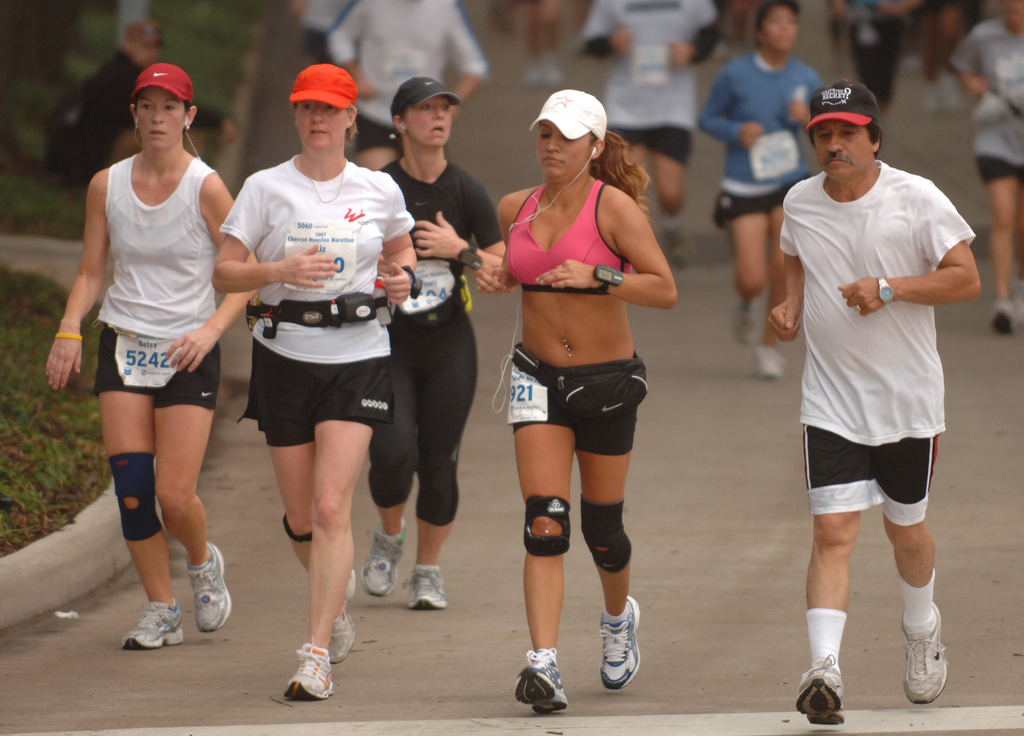 A quality running belt is among the most important gear choices a runner can make. The right belt will allow you to carry essentials on long runs while evenly distributing weight and causing minimal disturbance. Here’s the five that get the best reviews from runners worldwide:

5. Amphipod AirFlow Lite Waistpack
Though a little less belt-shaped than some of its competitors, Amphipod’s waistpack holds up with the best, straddling the territory between fanny pack and running belt. The pack is meant to be worn in the small of the wearer’s back, where it comfortably holds everything you need in two compartments—the inner one weatherproof, the outer one with a mesh covering to let the contents breathe. Its 9×2″ dimensions allow you to carry several items at once—you can run while simultaneously carrying a phone, keys, and a pair of sunglasses. But despite its size, the pack hardly jostles at all, becoming almost unnoticeable (except when sprinting) after only brief use.

4. FlipBelt
This product works on a different principle than most competitors. Rather than having pouches accessible via zippers, the entire belt is a container—a tube with four openings along its length. Simply stuff your necessaries inside, flip the belt inside out and slide it on. It sits securely around your hips, thanks to its combo Spandex/Lycra makeup, stretching to accommodate different body dimensions. It weighs only 3 oz, and is so thin it becomes unnoticeable underneath a shirt. The only drawback is that accessing your items while running can sometimes be difficult, depending on how far inside you’ve inserted them.

3. Nathan 5K Runner’s Waist Pack
This large-capacity belt/pack is also great for runners who need to carry a lot with them—you can fit a wallet or iPod as well as a flip phone in its 7×4″ main rear pocket, and keep your keys in the small mesh pouch in front. Even the weight of a digital camera won’t cause this belt to bounce, but the dangling straps for tightening can cause some small annoyance. Users who find this to be a problem often cut the strap to the desired length and then slightly melt the end with a lighter to prevent fraying.

2. Nathan Gel Waist Pack
Unlike most of the other top running belts and waist packs, this one is designed specifically for carrying GU Energy Gel, with a tiny pouch designed for storing the empty wrappers to prevent litter. You can carry up to 7 packs of GU Energy Gel (or similarly-sized competitor product), or store a couple packs with your keys and smartphone. But specialization doesn’t mean lack of versatility—even if you don’t use energy gels at all, the snug-fitting waist pack can hold what you need to carry. The multiple pockets include an internal pouch for valuables and a key clip, allowing you to run while maintaining energy and keeping your most essential items close.

1. SPIbelt
By far the most popular running belt, the SPIbelt is extraordinarily compact, yet capable of simultaneously holding an iPhone and an energy bar, or 5 GU Energy Gel packs. Its streamlined design makes it ideal for runners who want to carry only the essentials, however, because that’s all you’ll be able to fit—sunglasses or a wallet can be difficult to squeeze in, though the stretchy material gives the belt surprisingly high capacity. There’s only one long pouch, accessible by external zipper, but the elastic material keeps items from sliding around. Reflective coating makes it great for night runs, but the material is not waterproof, so placing easily-damaged objects inside a plastic bag can be a good idea.