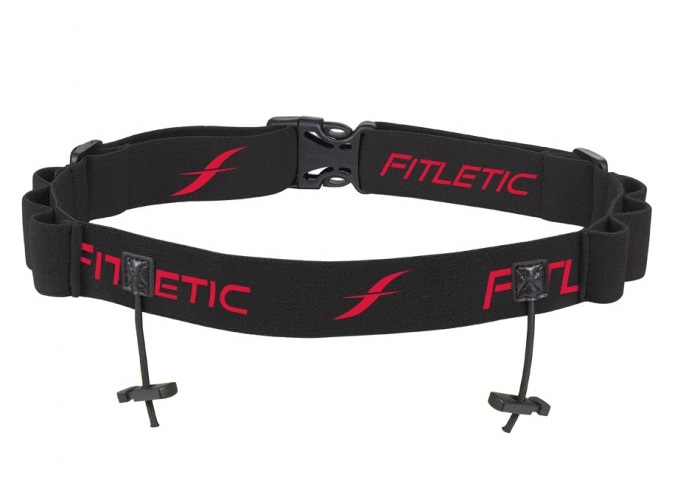 This unusual running belt is available on a number of websites under a number of names. Some feature the Fitletic logo, others the name of a probably-now-defunct (or simply renamed?) company named iFitness. Sometimes it’s called a “Gel Holder Running Belt,” sometimes a “Race Belt with Gel Holders;” on Fitletic’s own site it’s a “Race Number Holder with Gel.” But despite its strangely generic series of monikers, this is a belt worthy of note.

What sets it apart is its extremely specialized purpose. Unlike the vast majority of running belts, which involve pockets designed to hold basically anything you care to put inside of them, this belt is designed to carry one thing and one thing only—energy gels. Instead of a general-purpose pouch, there’s a series of loops, three on each hip. These are just the right size to each hold a single sports gel, keeping it secure through a grueling run until the moment when you slip it out and swallow it down. For runners who like to carry their phone and other valuables, this won’t do at all, but if you’re a minimalist athlete running a marathon or triathlon, this may be exactly what you need—six gels will sustain you for miles.

The rear of the belt features a pair of toggles for attaching your race number, allowing the belt to double its usefulness without the need for additional attachments. These can be easily shortened to stay out of your way if you’re just training, or employed as designed to identify you in a race. The belt itself is also easily adjustable, fitting any waist between 24″ and 55″ in circumference. The belt’s fabric is soft enough to wear against your skin, and won’t bounce around, though some users find that it occasionally slips a little when soaked through, and may need tightening.

The belt features reflective material to increase visibility during night runs, and comes in four color combinations—black with red lettering, black with orange, black with yellow, and pink with grey. While this highly specialized belt isn’t for everyone, those who carry nothing but gels, and plenty of them, will find it very useful.