Here’s a piece of equipment that bursts the boundaries of what normally comes to mind when you say “running belt,” yet still somehow seems like it participates in the same Platonic form. It’s even called SpiderBelt—but the spidery side of things has given it the power to leave your waist behind and instead crawl up your torso. And it’s amazing. 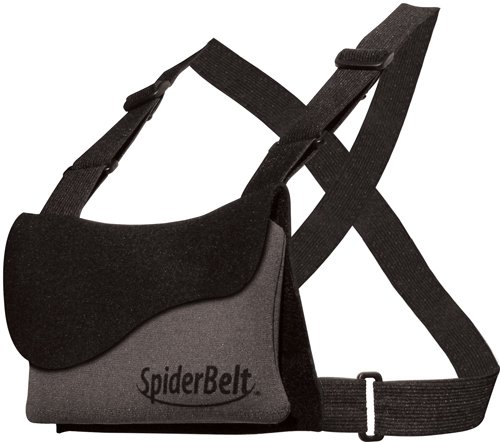 The SpiderBelt Pro might, actually, be more honestly described as a sport pocket or running pouch, a category of equipment of which running belts make up a notable part. If you’ve experimented the other members of this diverse family, such as wrist and shoe pockets, you’ve likely realized that they’re wimpy wanna-bes, far to small for anything useful. Not only are we here to say which are the best running belts, we’re also here to say that running belts are the best! But…for some people, a waist-mounted belt just doesn’t cut it. Depending on the belt, your physique, and your running style, you may find that no matter which belt you try, it flaps and jostles with every step. And that’s where this stunning alternative comes into play.

It’s a zippered neoprene pocket that rests gently on crossed shoulder straps, suspended securely in the middle of your chest or between your shoulderblades. Due to its small size and wide base of support, there’s simply no bouncing possible. As you’ve no doubt noticed if you’ve compared many running belts, neoprene means sweat-proof and water-resistant, and this thing’s definitely got it. The pouch is fairly small, but larger than those found on many more traditional running belts—you’ll be able to fit a smartphone in any brand of case with no problem, with a little room left over for other essentials. The pocket rests underneath a zipper-protecting flap for a streamlined, stylish appearance, but accessibility is the most important consideration.

And the SpiderBelt Pro supplies it. Even if you’re wearing it on your back, getting at the things you brought with you is still remarkably easy. This is due to the fact that the pocket detaches from the support harness and backing, suddenly turning into a temporary wallet or small purse. No more fumbling uncomfortably in the vicinity of your pelvis—you can hold it all freely in your hands, and then reattach it when you’re done.

The nylon straps are quite soft, and are fully adjustable in each quadrant, allowing you to position the SpiderBelt Pro exactly the way you want it. The entire apparatus comes in four color schemes—the overflap and straps are universally black, but the removeable pocket can be yours in charcoal, hot pink, purple or turquoise.

You can find the belt more or less exclusively on the company’s website.