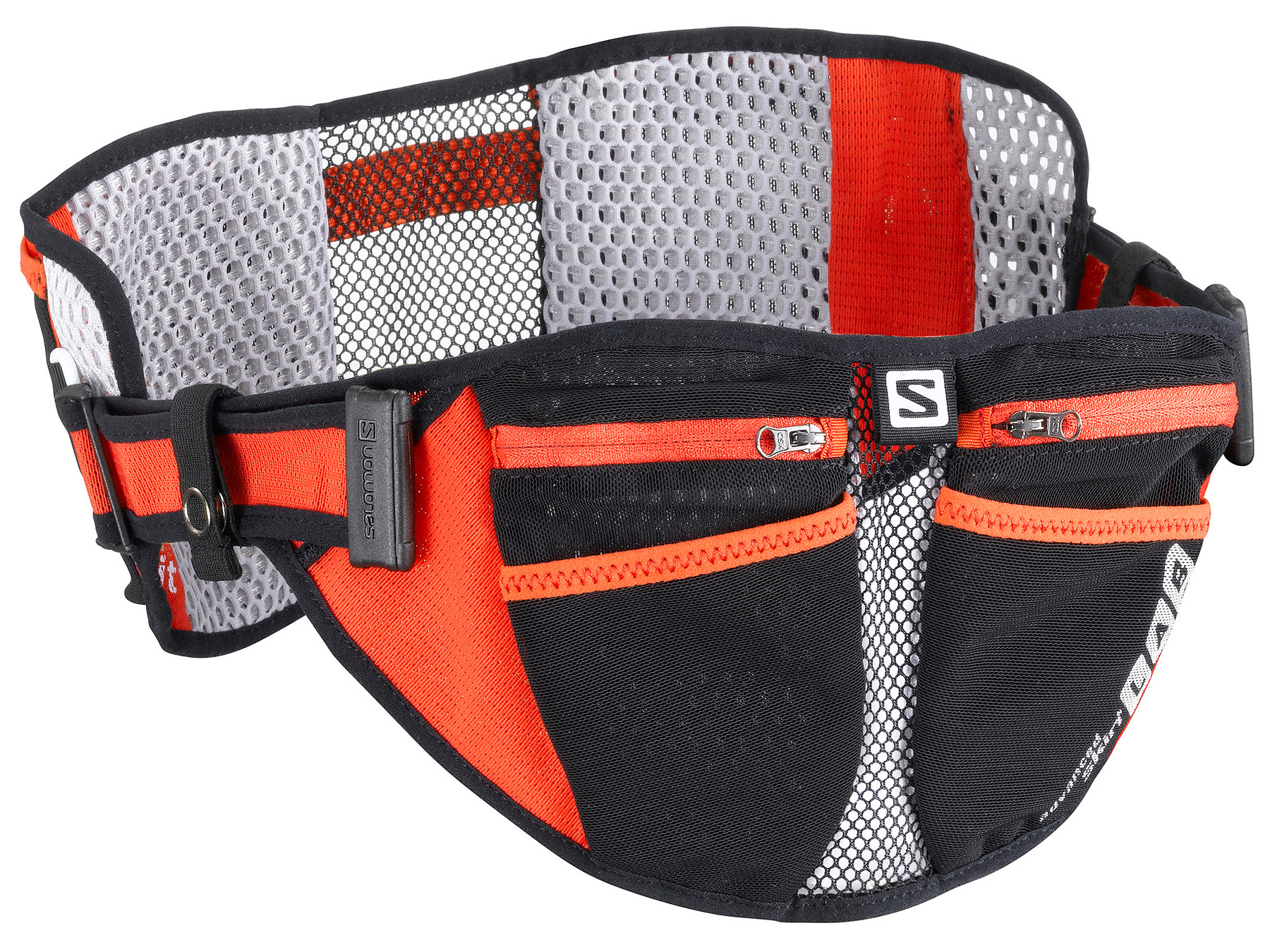 Salomon is a brand of outdoors equipment that seems to be almost unheard-of in the United States, but is quite popular in Europe. Founded in 1947 in the French Alps by Francis and George Salomon, who all but single-handedly invented modern ski equipment, Salomon today also sells snowboards, backpacks, boots, athletic wear of all sorts and (as you no doubt guessed) running belts.

The S-Lab Advanced Skin S Belt is larger than most American-made running belts, which are almost invariably designed with a single pouch on a narrow waistband, but its stretchy 3D mesh material is very lightweight—despite having a total of six pockets, the entire thing weighs just 5 oz. Comfort and flexibility are the main aims here. Made entirely of mesh, it’s not only extremely breathable but molds to the contours of your body, eliminating jostle and bounce. The S Belt eschews traditional buckles for a quick-release twist-on-and-off locking mechanism that’s easily adjustable to fit your waist.

The belt is reversible, allowing you to wear it however you like, but the side officially known as the “front” is the one designed to hold water bottles. Note that there’s no thermal backing on the belt, which means your body heat will gradually warm the water, but that’s the price you pay for ultralight high-capacity. And of course, you can put whatever you like in the two mesh pockets, but they’re exactly the right size to hold Salomon soft flasks, and a single 8-oz. one is conveniently included (the second flask, if you want one, is on you). The 5-oz. flasks fit just as well, and an elastic cord in each pocket holds the flask securely as it deflates.

That’s the thing that distinguishes Salomon’s flasks, and by extension this belt, from almost every genuine hydration belt out there—unlike a bottle, which retains its shape, the flask compresses itself. The bite-activated valve prevents leaking, but eliminates the need to suck. The flask just empties itself into your mouth. And here’s the truly important part: unlike bottle-loaded belts, which tend to bounce around more as you drink, their contents having more room to slosh, the S Belt becomes increasingly secure. No sloshing included.

The other side of the belt, which for convenience we’ll call the “back”, contains two more open mesh pockets for energy gels or bars. The pockets can fit four or five each, making the S Belt ideal for long runs. Above these two can be found two American-style zippered pouches, allowing you to carry two smartphones—or, for the non-Beduins among us, a phone in one pocket and an assortment of other small valuables in the other.

The S Belt comes in two color schemes: the red and black pictured above and a sky blue/tan/grey alternative. A race-number clip increases its utility for marathon use, and reflective elements provide enhanced visibility.