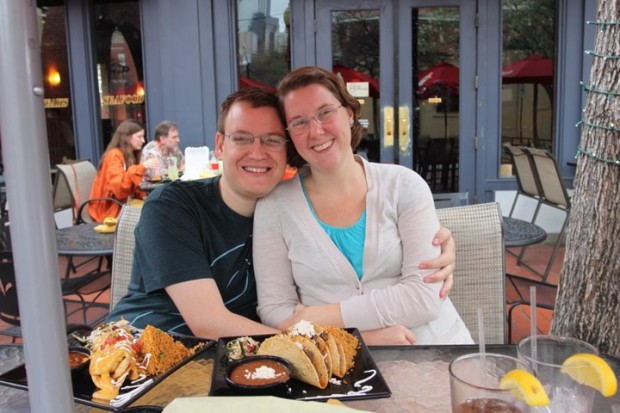 Welcome to our web site about running belts. The above photo is a picture of myself, Chris, with my wife Jana. The photo was taken in downtown Dallas, TX and in hindsight, it looks delicious! The photo was from a family trip in early 2011 right after we were married.

Why did we start this site?

The purpose of this web site is to assist readers in finding and comparing running belts.

Jana is the runner in the family. She’s been running for ages, and over the last few years has really started to take it seriously. She has competed in more than a dozen events over the last 24 months. She is running her first half-marathon this November.

Beginning in October, 2013, we’re going to start publishing our reviews of the best running belts. We’ll be looking at, and evaluating the available belts on the market, and sharing the best with you.

Also, we’re working on a product-matrix that will make it easy for you to compare all of the best running belts on the market on a single page.

We’ll be linking over to Amazon.com (with an affiliate link, so you know). We might also link to some other online stores for convenience. Later on, once we’ve succeeded at building our audience we’re discussing the idea of selling running belts direct. Our dream is to open this site as a full shopping-cart-experience and make a little business from it.

Chris is a web site designer and interface designer based in Phoenix, AZ. He operates a web design company in Phoenix called Tornado, and managed web sites for customers all over the U.S. In his spare time, he writes travel advice about Arizona on one of his other web sites about Arizona.

Send us an email!

We would love to hear from you, our readers! If you have a suggestion for a running belt you’d like us to check out, a correction or just want to complain, send us a message using the form below or email us at hello@bestrunningbelt.com, thanks!

Which running belt is best?

That’s a nearly impossible question to answer because everybody needs something different. Do you need to hold a smart phone? Take a water bottle? hold your keys or garage door?