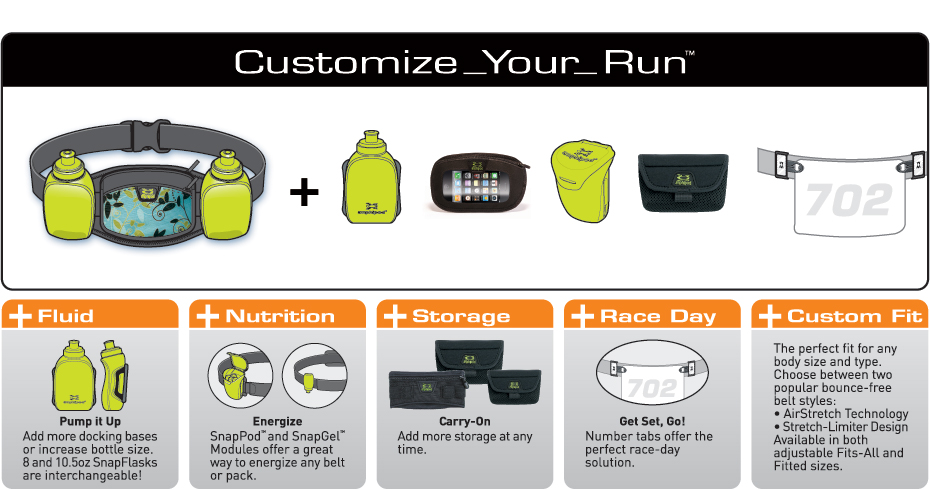 Customization isn’t just fun, it’s essential to humanity. When you buy a product you’d rather have it represent the symbol of your individuality and belief in personal freedom than your assimilation into the Borg. Many running belts gesture in this direction with a choice of pocket colors or some similarly superficial set of options, but rarely is functionality something that’s up for you to pick and choose from. Rarely, until now. Enter Amphipod’s Customize_Your_Run™ series.

(Yes, the name of almost every running belt or series of belts is trademarked, and yes we usually omit the ™ in these reviews. But something about the combination of underscores and blatant reminders of corporate ownership in this article’s title seems ostentatiously appropriate.)

It’s not just about having exactly the belt you want. There’s so many options on the market that you’re sure to find the perfect running belt for you (just keep reading these reviews!). It’s more about the fact that, as you prepare for the big race, or improve as a runner, or try out a new trail, your needs are almost guaranteed to change. Normally you’d either tough it out or buy a whole new belt, but with Amphipod you can just customize_your_run™ by switching out belt accessories.

You start with just a simple waistband made of a breathable, slightly elastic material—the AirStretch Belt, which comes in five different color combinations. If you think a permanent pocket built into the belt is something you’ll want, try one of the two alternate forms of construction. The AirStretch Belt/Pack provides two integrated pockets for your cell phone or other items, while the AirStretch Trail pushes past fanny-pack territory into the tiny-backpack-on-your-waist realm, with external bungee rigging and a pocket big enough for a windbreaker or a couple sandwiches.

Once you’ve established the baseline, it’s time to really get down to customization. Sometimes you’ll need to hydrate, so a good place to start is with a snap-on water bottle holster or two. Or three. Or four. The holsters attach horizontally or vertically and the bottles come in 8-oz. and 10.5-oz. varieties, designed for rapid squeeze-and-pull-out use. Four-ounce gel bottles with similar holsters can be used the same way, allowing you to dispense with individual gel packets. If you like them in packets, though, you can still have it your way with the SnapPod, a lidded plastic container that attaches to your belt.

For more general storage, there’s a broad range of zippered pouches in varying dimensions that you can attach or not attach to your custom running belt. The biggest difference here from your average belt is that you can put them anywhere you like around your circumference, or wear two side-by-side, or any other way you can think of. The SmartView pocket is innovative in its own right, however—the transparent exterior allows you to see and even use your phone or MP3 player’s touchscreen mid-run. And to round out the range of possibilities there are attachable race number tabs, reflective loops and even a clip-on flashing LED for midnight running safety.

The belt and add-on components can be purchased at several real-world retailers, from the company, and from numerous online stores.