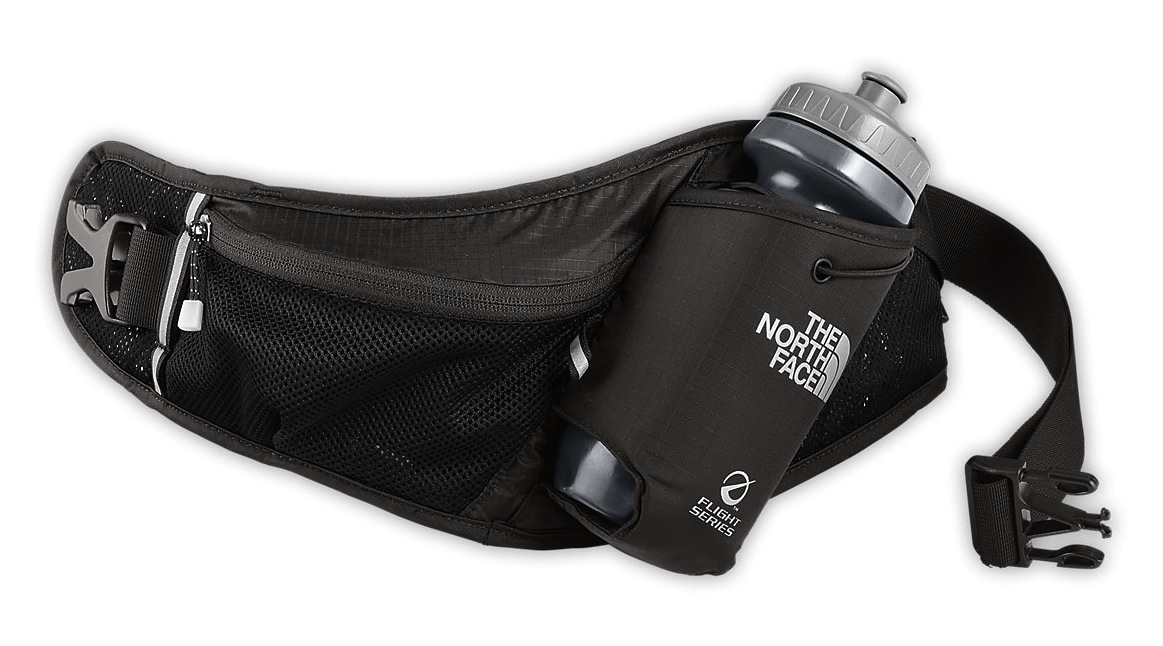 Many of the best running belts out there are the product of specialized companies: belts are all they do, and they do it well. But every now and then you get a belt that’s the product of a general outdoorsmanship company—you’re only going to find a handful of running belts amidst the swaths of hiking boots and backpacks, but what you’ll find is sure to be interesting. Such is the case with The North Face’s Enduro Belt 1.

It’s a hydration belt, yes, but that’s only half the game—the Enduro is capable of carrying quite a bit in its large zippered pocket, not added on as an afterthought as with so many hydration belts, but fully integrated into the main structure. Its asymmetry is another notable feature. Unlike most belts, which would look no different if you cut them in half and laid them against a mirror, the Enduro is intentionally lopsided. The bottle sits in the small of your back, angled toward the right for easy retrieval, while the pocket wraps around your left. With one hand designated for each task (snacks and gels sinister, water-squirts dexter) you don’t have to reach as far for either one. And even the buckle is off-center. Positioned at the edge of the pocket and protected by the padded backing, you won’t get any of the discomfort that can result from having a plastic clasp digging into your skin on a symmetrical belt.

That backing is worth talking about on its own. Made out of something called E-VAP foam, it’s designed to wick away moisture and provide a soft, breathable foundation to support everything you’re carrying. It’s covered with a silky nylon mesh that’s even comfortable against skin, if you’re into barebacked runs. The 20-oz. included bottle is held in place by a bungee system, which both holds the bottle tight when you don’t need it and stretches a little to let you quickly grab it when you do (there’s a dual-bottle variant, predictably known as the Enduro Belt 2, but it tends to get less positive reviews due to its decreased storage space).

And speaking of storage space, this belt has a lot of it. The zippered pouch can comfortably hold a smartphone, an energy bar and a bunch of keys simultaneously, and includes a key fob and a pocket divider for added convenience. This versatility alone wouldn’t necessarily merit calling this the Ford Model T of running belts, but combined with the color scheme, it might—the Enduro is one-size-fits-all, one-color-fits-all, so here’s hoping you like dark grey.